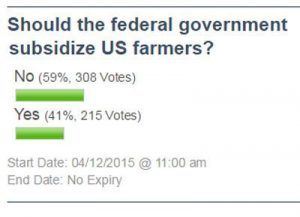 A recent informal myMotherLode poll asked “Should the federal government subsidize US farmers?” 59 percent were against subsidies and 41 percent were for them.

Congress legislates the amount of farm subsidies through five-year farm bills recently passed in 2008 and 2014. The Agricultural Act of 2014 defines payments through fiscal year 2018. U.S. Department of Agriculture (USDA) funding is one of several items that will be addressed in the 2016 Presidential election.

USDA subsides include commodity subsidies, insurance subsidies, conservation subsidies, and disaster subsidies. Farm subsidies play a role in the cost and availability of agricultural commodities. The top five commodities, by value of sales in 2012, were; cattle, corn, poultry, soybean, and dairy.

Last month, over a year after the 2014 farm bill was passed, the USDA proposed a new rule to define and limit payments to only “actively engaged” farm managers. Agriculture Secretary Tom Vilsack says, “The Farm Bill gave USDA the authority to limit farm program payments to individuals who are not actively engaged in the management of the farming operation on non-family farms. This helps close a loophole that has been taken advantage of by some larger joint ventures and general partnerships.”

The USDA rule proposal notes the current definition of “actively engaged” managers was established in 1987, and allows payments to an unlimited number of managers of some operations. The rule is open to public comment until May 26th and could go info affect in 2016.

According to the USDA the 2014 Farm Bill eliminates direct payments and continues crop insurance. The current system hopes to prevent paying producers regardless of whether they incurred losses. Since 2011 producers impacted by disease or adverse weather did not receive financial assistance, the 2014 Farm Safety Net Restored livestock disaster assistance for losses dating back to 2011, and established a permanent livestock disaster program. A summary of the 2014 farm bill is here.

The 2014 Presidential budget summary notes that it expects to reduce the deficit by $37.8 billion over 10 years by eliminating direct farm payments, decreasing crop insurance subsidies, and targeting conservation programs.

According to Environmental Working Group’s best estimate 9.2 percent or 7,444 farms in California received Government subsidies. By their numbers California is ranked 32nd among number of farms subsidized despite ranking 8th in total number of farms statewide. Texas has the most farms and ranks 4th with 19 percent of them subsidized. In Iowa 80 percent of farms are subsidized but that is only the second highest rate, North Dakota has the highest with 83 percent.

According to the 2012 agricultural census the value of agrucultural sales in Fresno County in 2012 was $4.97 billion. This makes Fresno county the number one ranked county in the U.S. and even places it above 23 states. The census also found that soybean and corn comprised more than 50% of all cropland harvested for the first time ever. 163.5 million acres of soybean and corn were harvested in 2012.

In fiscal year 2015, the federal government is projected to spend around $3.8 trillion with the Food and Agriculture budget 3 percent of the total or $152 billion.