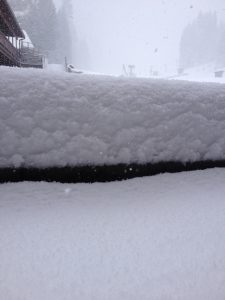 Pinecrest, CA — Areas like Dodge Ridge received over a foot of snow with the latest storm system that passed through the region.

It came too late for this year’s shortened ski season, but a spokesperson says 13 inches of new snow is on the ground, as of this morning. Over the past 48 hours, Bear Valley Resort, which is planning to close for the season on Sunday, received 17 inches of new snow.

In Tuolumne County, light to moderate snow was reported in areas such as Soulsbyville and parts of Phoenix Lake. The CHP had to conduct traffic control near Twain Harte last night due to notable snow accumulations.

The storm system also brought heavy rain to the foothills and Central Valley. T.U.D. reports this morning that it’s regional plant in Sonora received 0.88 inches over the past 24 hours.