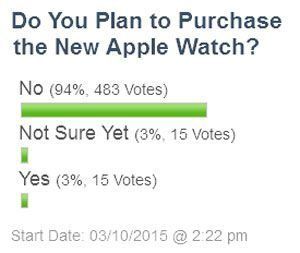 Despite headlines ranging from the Associated Press “AP Analysts: Apple is poised for success with watch” to the Forbes article this week by Dan Matthews “Why the Apple Watch won’t sell” an informal myMotherLode poll was clear: 94 percent are not buying it. There were 15 votes for yes- 3 percent of the total and another 15 votes for not sure.

The Diffusion of Innovation Theory found that when a new idea or thing comes out the adopter distribution is a bell curve with the first 2.5 percent to use it labeled as “innovators” and the next 13.5 percent as early adopters. Smart watches aren’t expected to catch on until more than 13 percent of people are interested.

A variety of wearable technology is gaining acceptance, pedometer-tracking devices like the Fitbit Zip and Nike FuelBand are available.  One year ago a Neilson study reported that Seventy percent of consumers are aware of “wearables,” and about one in six (15%) of them currently use wearable tech—such as smart watches and fitness bands—in their daily lives.

In June 2014 The first-ever “Piper Jaffray Watch & Wearables survey” polled nearly 100 individuals with an average age of 32 years old and household income of $130,000. Those surveyed were 61 percent female, with almost all respondents from North America. Among the 86 percent who said they wouldn’t buy a watch, some users said they would be far more interested at a price below $200. However, 41 percent of respondents said they would not be interested in an “iWatch” regardless of the price.