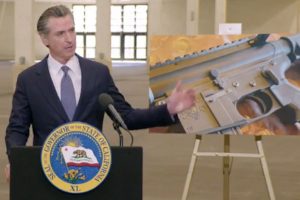 Sonora, CA – Some Democratic lawmakers in California are targeting the new Texas abortion law to take aim at gun manufacturers.

The proposed bill in the state Legislature would let private citizens enforce the state’s assault weapons ban by filing civil lawsuits. It has the support of Gov. Gavin Newsom who at a press conference in the San Diego area gave his backing, stating, “To reconcile this remarkable and absurd, completely NRA [National Rifle Association] backed, bought and paid for legislation to provide immunity to the gun manufactures only and to challenge that here in the state of California.” Newsom added, “It has gotten so ridiculous, so extreme and California is now going to start playing on their terms.”

The bill is modeled after a Texas law that allows private citizens to sue abortion providers for performing abortions after a fetal heartbeat is detected. The U.S. Supreme Court has allowed the Texas law to stay in effect pending a legal challenge. The way the bill works is that the government does not enforce the law, so abortion advocates cannot sue the state to block it. That makes it much harder to challenge in court. California’s bill would let people sue gun-makers and others who sell, make or distribute assault-style guns in the state to stop the spread of these weapons and recover a minimum of $10,000 in damages for each weapon, plus attorney’s fees. It would apply to those who manufacture, distribute, transport, import into California, or sell assault weapons, .50 BMG rifles or “ghost guns” untraceable weapons that can be bought online and assembled at home.

There was a swift response from one gun owners advocacy group that promised an immediate legal challenge if the bill becomes law. A representative from the Firearms Policy Coalition called the restrictions just “modern-day Jim Crow laws designed to suppress the exercise of human rights the tyrants who run California don’t like.”

Part of four pieces of legislation aimed at gun makers,  three other bills would make it illegal to market assault weapons to children, crackdown on ghost guns and make it easier for people to sue gun manufacturers for liability in shootings.