Some Concern About Measles Cases In the U.S. 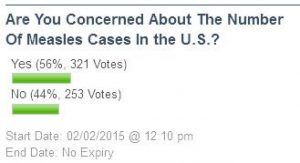 This week’s informal myMotherLode.com poll question asked about measles. The question was: “Are You Concerned About The Number Of Measles Cases In the U.S.?” The results:
56 percent said Yes and 44 percent said No.

Media outlets have been criticized for over publicizing small outbreaks and fueling the controversy over children’s vaccinations. Specifically, an outbreak from an unknown person who went to Disneyland in late December resulted in 84 confirmed cases of measles.

Dr. Kelaita, Calaveras County health officer says, “Measles is a very contagious viral disease that is spread through the air when someone who is infected coughs or sneezes.” A statement released by the Health Department states that an infected person can spread the disease for about eight days – four days before the rash starts and four days after the rash appears on the body.

The Tuolumne County Public Health Department released information that a local suspected measles case was negative.  Tuolumne County Health Officer Dr. Todd Stolp says, “While at this point there have been no cases of measles in Tuolumne County since 1994, ongoing surveillance and monitoring during the current statewide outbreak will continue to be important. This remains an important time to discuss your vaccination status with your health care provider in order to protect you, your family and members of our community who are unable to tolerate vaccinations from vaccine-preventable illness.”