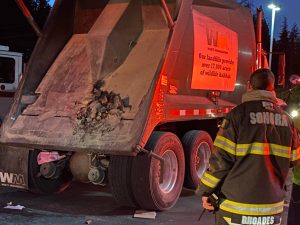 Sonora, CA — The California Highway Patrol is praising the quick work of a dump truck driver after a fire ignited early yesterday morning within the trash area in the rear of the vehicle.

The CHP reports that the driver stopped to service a customer in the Columbia area and noticed his load had caught on fire. He attempted to compact the load and smother the fire, but it didn’t work. He then pulled into the vacant parking lot at Columbia Elementary School and emptied the trash and quickly put out the fire with an extinguisher. The CHP reports that the action “avoided disaster.”

It is not immediately clear what caused the fire.