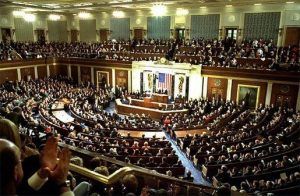 Sonora, CA — Congressman John Boehner may have been elected as Speaker of the House of Representatives but several Republicans voted for someone else. Local Congressman McClintock talks about why he voted for Boehner and what the 24 votes against Boehner mean in his newest blog.

In yesterday’s election of the Speaker of the House of Representatives, the vast majority of Republicans and Democrats voted for their party’s leader; 216 cast votes for John Boehner (OH-R) and 164 for Nancy Pelosi (MD -D) out of 408 total votes. The 24 votes against Boehner represent the most “no” votes against a speaker in the last century. There were 5 nominated for speaker including Pelosi. Four Democrats did not vote for Pelosi. It would take just under 30 republicans to vote against or not voting for Boehner to trigger another round of voting until a 2/3 majority vote was reached. Last year Boehner avoided a second vote by six votes, with 12 republicans not voting for him, when fewer republicans were in the House.

Daniel Webster (FL-R) received 12 votes, Louis Gohmert (TX-R) had three, and Ted Yoho (FL-R) 2. Webster released a statement that said he ran to “produce sound public policy for the people who sent us to Washington on their behalf.” He concluded, “With leadership elections behind us, and a willing partner in the Senate, our conference is united in reforming the way Washington works, opening up our government and advancing pro-growth, principled solutions.”

Local 4th District Congressional Representative Tom McClintock says, “I am disappointed in Mr. Boehner’s leadership of the House and have expressed my concerns on many occasions. But shifting this decision from the House Republican Conference to the House Floor opens a Pandora’s Box.” To read more about why McClintock voted for Boehner read his blog here.