New Melones 48% Down From Last Year 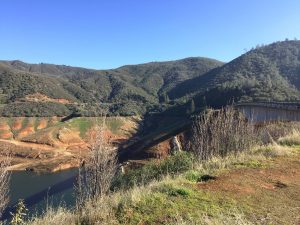 According to the latest California Water Reclamation Bureau figures (see graph in slide show for details) the lake, now at 508,075 acre-feet, is at 23% of its capacity and at 40% of its historical average. The difference from last year’s figure, at 1,049,283 acre-feet, is 48%.

Images of the lake taken by myMotherLode.com January 1, 2015 capture the marked contrast of the current level from previous tide marks. Due to a six-foot rise in the water level this past month, Glory Hole Point boat launch and dock are now partially open.

Only two other of the state’s reservoirs, Exchequer and Pine Flat, are at lower percent capacities, at 7% and 13% respectively; and only one, Pyramid Lake, at 93%, is near its capacity.