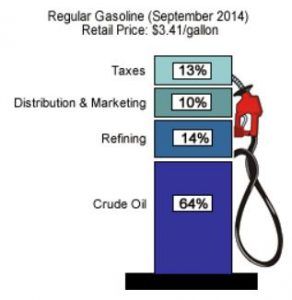 Sonora, CA — The average price of a gallon of regular unleaded gasoline has dropped by a dollar since May.

Nationwide, the average price is $2.72, which is a four-year low. It has fallen 12 cents in just the past two weeks, according to the national Lundberg Survey.  The relief at the pumps is attributed to a drop in overall crude oil prices.

San Francisco has the highest average price at $3.04 and Albuquerque, NM is the lowest at $2.38. The myMotherLode.com gas price section shows that regular unleaded in Tuolumne and Calaveras Counties ranges from $2.73 – $3.05.

On a related note, we reported earlier this month that Mother Lode Senator Tom Berryhill is concerned that gas prices in California could soon be going up due to cap-and-trade regulations soon taking effect. Click here to read the earlier story.