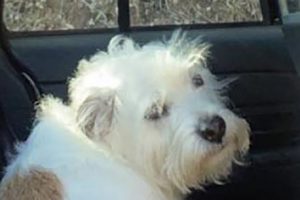 Tuolumne Sheriff’s Deputies assisted fire crews with a blaze on Skyline Road in Tuolumne on Thursday morning with clearing nearby residences, as reported here. CalFire determined two houses were in danger from the flames. The one directly east of the blaze was considered at most risk with fire officials deciding forced entry was needed to make sure no one was inside, according to sheriff’s officials.

While doing a safety sweep of the house, deputies discovered a shivering dog in one of the bedrooms. Deputy Keoka Souza whisked the doggy from the home and kept it warm and safe in his patrol vehicle until the pooch could be returned to his owners. Luckily, no individuals were injured in the blaze and no other homes were damaged by the flames. What ignited the fire remains under investigation.