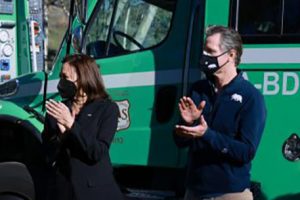 Sonora, CA – A helicopter ride to inspect fire damage in the Southern California mountains for Vice President Kamala Harris was the backdrop to highlight new funding for federal wildfire programs.

Harris’ homecoming was to tout $600 million in disaster relief funding for the U.S. Forest Service in California. While visiting a federal fire station in San Bernadino yesterday with Gov. Gavin Newsom and California Sen. Alex Padilla, fire officials detailed the increasing risk of destructive blazes and outlined new spending aimed at reducing the risk of wildfires and dealing with their aftermath. She hailed the work of firefighters and noted that the government is “putting the resources where they are needed” in the battle against fires and climate change.

The passage of the infrastructure legislation provided $1 billion to create plans to help defend communities from wildfires, $650 million for rehabilitation efforts for burned areas, and nearly $2.4 billion for hazardous fuels management. Earlier this week, the administration said it will expand efforts to fight wildfires by thinning forests around “hot spots” where nature and neighborhoods collide.

“A federal, a state and a local collaboration around preparedness and what we can do to engage in resilience, meaning what we can do to strengthen communities so if they are hit that they can bounce back,” detailed Harris, adding, “And before that what can we do to help communities, so that not only are we dealing with forest but we are talking with homeowners and reaching out to communities to figure out how we can support them to create a community that is less likely to be so significantly damaged if a fire should hit.”

The administration has also crafted a $50 billion plan to more than double the use of controlled fires and logging to reduce trees and other vegetation that serves as tinder in the most at-risk areas with funding still being worked out, as earlier reported here.

“California is on the frontlines of the climate crisis, experiencing record-breaking heatwaves, wildfire seasons, and droughts. We’re fortunate to have the Biden-Harris Administration’s partnership in meeting this existential challenge head-on,” claimed Governor Newsom.