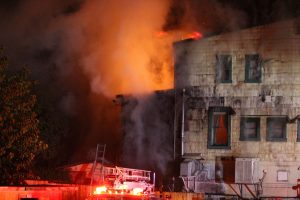 Coulterville, CA — Fire officials are actively investigating what ignited the flames that damaged much of the historic Hotel Jeffery in Coulterville.  Mariposa County Fire Department Battalion ChiefJim Monty says, “It [the fire] is not looking suspicious at this time, but it could take a couple days to determine the exact cause of the fire.”

In addition, the Mariposa Sheriff’s office released new details on the blaze.  “It was reported on Wednesday morning at one o’clock from a hotel guest,” says public information officer Kristie Mitchell.  “There were about 75 firefighters on scene.  There was significant damage, but the building did not burn to the ground. It is still standing.”

Mitchell says the hotel and saloon are closed until further notice.  No one was injured in the fire.

The Hotel Jeffery was built in 1851 as a stopover to aid stagecoach passengers on their way to Yosemite.  There have been several notable guests over the years, including Teddy Roosevelt, John Muir, and Mark Twain.  It has one of the oldest operating saloons in California.

A special thanks to our community news partner Joan Foulkes for sending in these photos.