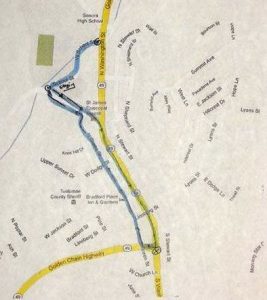 Sonora, CA — Streets in downtown Sonora will be closed tomorrow for the Wildcats Homecoming Parade. They will be playing Summerville for the first time since the 1993.

Rick Francis who retired last year as head coach of Sonora High School’s boys basketball team and who is also a Sonora football alumni says, “I played Summerville the year I graduated in 1966. We played them that fall of 1965 and after I graduated they played them a couple years.” He says, “I think the last time we played them, was I think, the 1993 season. It was felt that we were too big for Summerville, and I think it was head coach Dave Woods at that time, who was concerned that that Sonora was too big. We were growing back then and up to 1,450 or 1,500 [students.]”

Francis says he is excited about the homecoming game, “You know back when I played it was a big turn out. It is going to be a great community game. It is going to be a fun evening, I know our student body is excited.” Sonora is selling tickets to the game and the gates will open at 4pm. Tickets can be purchased from Nancy Weisner, bookkeeper and student body secretary. Her office is located near the main administration office at the end of the breezeway and to the left at the last window.

Summerville Principal David Johnstone says the Summerville students are also looking forward to a “Great night and a great challenge.” He says they have met with many Sonora students and faculty and Summerville’s slogan is “Victory with honor” they will celebrate success whoever wins. Johnstone says “I believe there will not be a seat left in the house.” He also anticipates a wonderful half time show which will be more than a coronation but also involve a community wide fundraiser for a great cause.

Following the parade, the Golden Regiment Band will perform in Courthouse Park for approx. 15 minutes. During the band’s performance, Green Street will be closed between Bradford and Yaney Streets. There will be no parking allowed on Green Street between Yaney Street and Stockton Road during the parade. These areas have been posted with “No Parking” signs.