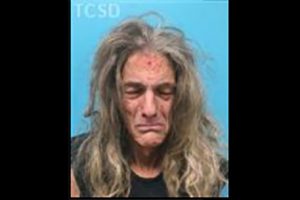 Sonora, CA – A Sonora man was arrested after allegedly pointing a gun at his landlord and firing.

The incident happened at a property on Dusty Trail, off Lime Kiln Road in Sonora last week. When Tuolumne Sheriff’s Deputies pulled up to the home the landlord relayed that initially, she heard a single gunshot. Hearing it coming from the direction of the trailer on the property occupied by tenant, 57-year-old John Harvey Porter, she decided to investigate. She told deputies that Porter came outside still holding the gun and yelled at her. Adding that he then loaded a shell into the gun, cocked it, and pointed it at her. Sheriff’s officials say that the victim reportedly turned away from Porter and she heard a second gunshot.

When deputies tried to contact Porter, he refused to come out of the trailer, but about 30 minutes later did comply. No gun was found on Porter, but sheriff’s officials say he did have a large fixed-blade knife in a sheath on his belt. Inside the trailer, deputies found a shotgun and an expandable baton, which is illegal to have in California.

Evidence at the scene proved the firearm had been fired. Due to the fact that there were occupied homes and buildings in the general area that could have been hit and that the victim wanted to press charges, Porter was subsequently arrested. He faces possible felony charges for discharging a firearm in a grossly negligent manner and brandishing a gun in a threatening manner. Porter’s bond was set at $20,000.