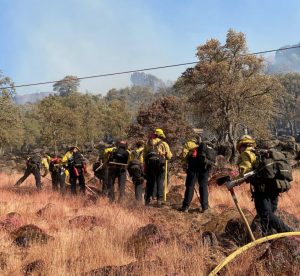 Sonora, CA — Causes have not been released on two wildfires that threatened communities in Tuolumne and Calaveras counties this past summer.

The Washington Fire ignited at around 1:20pm on August 26 between Sonora and Jamestown near Golf Links Road and Highway 108. Cleanup continues after the fire burned 136 acres and destroyed 19 structures. CAL Fire reported in late September that the cause was “accidental in nature” and arson had been ruled out. No additional information was supplied.

Clarke Broadcasting sought an update from CAL Fire, and spokesperson Emily Kilgore relays that “no arrests or citations were made, the investigation has concluded and the lead investigator is finalizing his report.” It is not immediately clear when the report will be finished.

We also reported earlier that one person was found deceased in the Washington Fire burn area. The Tuolumne County Sheriff’s Office spokesperson, Sgt. Nicco Sandelin, reports that officials have not yet been able to identify the victim or determine the cause of death.

Meanwhile, the Airola Fire ignited on August 25 at 2:55pm near Parrotts Ferry Road and Airola Road in Calaveras County. It burned 639 acres and threatened some nearby communities. Kilgore relays that the investigation into the cause is still open and no arrests or citations have been made. Signaling an indication that the investigation has slowed, she says the agency is no longer actively seeking information from the public.