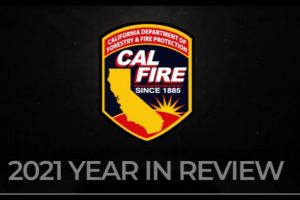 Sonora, CA – Calling it a year that “continued to test many,” CAL Fire officials released the statistics on last year’s statewide emergency responses – that included four of the 20 largest blazes in California history.

In a social media post, CAL Fire noted the “immense amount of work CAL Fire took part in during 2021” that included wildfires to medical emergencies, while also focusing on prevention and reforestation efforts. In total, CAL Fire responded to more than 511,000 calls for emergency services, traffic incidents, structure fires, and medical emergencies, and a key area of response to wildfires. CAL Fire provided these stats for those fires last year:

On Tuesday, CAL Fire revealed the cause of the second biggest wildfire, the Dixie Fire that burned 963,309 acres across areas of Butte, Plumas, Lassen, Shasta, and Tehama counties was due to PG&E equipment, as earlier reported here. The other fires include number 14 the Monument Fire in Trinity County, the Caldor Fire in Alpine, Amador and El Dorado counties at 15, and at 17 is the River Complex Fire in Siskiyou and Trinity counties. Here is the entire list.

Regarding the statistics for the CAL Fire Tuolumne-Calaveras Unit last year, spokesperson Emily Kilgore told Clarke Broadcasting those numbers are still being tallied. She stressed, “It takes some time to compile because we have to verify each entry.” Kilgore added that as soon as the totals are in that information will be reported out.

In the statewide stat social media posting, CAL Fire also relayed, “As we start the new year, we look forward to continuing to serve the citizens of California in 2022 and beyond.”