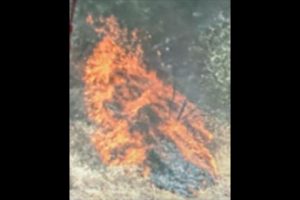 Amador County, CA — CAL Fire reports that from the beginning of the year until the end of August there have been 103 arson arrests in the state.

The most recent are two individuals, a man and a woman, both taken into custody yesterday for starting fires in Amador County. CAL Fire Amador-El Dorado Unit (AEU)  Law Enforcement Officers in cooperation with the Amador County Sheriff’s Office on Thursday (Sept. 9) arrested an adult male for ”recklessly starting a fire in the area of Highway 88 and Dalton Road.” That evening, they also took into custody an adult female on “suspicion of a series of arson fires in the community of Plymouth.”

No further details were released regarding how the blazes were started, their size, or whether evacuations occurred, or structures were destroyed or damaged. CAL Fire AEU officials relay, “These fire-related arrests are separate and not connected to the Caldor Fire.”

Of note, also today, CAL Fire announced that the cause of the River Fire that destroyed 142 structures in the Sierra Nevada last month was human-caused, but they did not reveal what led to that conclusion. The blaze began Aug. 4 in the overnight camping area of the Bear River Campground in the Colfax area of Placer County, CAL Fire officials said in a statement. They added that investigators are working on determining “the specific details leading to the cause of the fire.”

To report suspicious fire activity to fire officials, ask the public to call the Arson Tip Line at 1-800-468-4408.