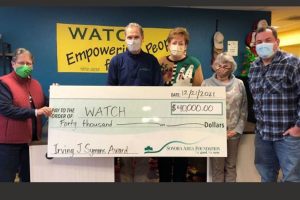 Sonora, CA — The Sonora Area Foundation has announced the recipients of its year-end grants and two organizations will share the $60,000 in funds.

The Tuolumne County Sheriff’s Posse that puts on the popular Mother Lode Round-Up, including a parade and rodeo in Sonora, was awarded $20,000 via the Elaine Symons Baker Award.  Sonora Area Foundation CEO Darrell Slocum noted that the posse has been dealt a double hit in recent years.  He explained, “Not only has the pandemic had a dramatic impact on their ability to sustain themselves and produce the event but it’s come at the same time that putting on the rodeo has become much more expensive to produce.”

The other grant recipient was WATCH Resources. “It supports adults with intellectual disabilities to live, work and play as integral members of the community,” says Slocum. The non-profit was awarded the Irving J. Symons Award of $40,000 for several reasons, with Slocum noting, “Long time executive director of WATCH Chris Daly has announced her retirement and I believe the (SAF) board selected WATCH partially as they wanted to recognize and acknowledge the tremendous work that Chris has done, and how valuable she has been to that organization.”

The SAF grant-making programs began in 1990 and continue to support local groups and the community today.