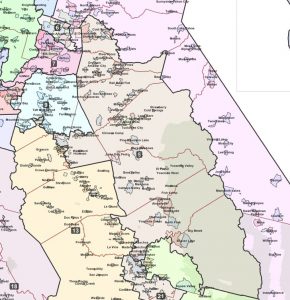 Much of the current Congressional District Four, represented by Republican Tom McClintock, has been split in half as part of redistricting.

The California Citizen’s Redistricting Commission finalized the maps that will take effect during the 2022 election.

McClintock’s current District Four stretches from up above Lake Tahoe, along the eastern outskirts of Sacramento, down through the Mother Lode and past Yosemite National Park.

That district will be split between newly redrawn districts three and five. District Three will include Lake Tahoe and stretch down through all of Placer, Plumas, Sierra, Nevada, Alpine, Inyo, and Mono counties. In addition, it covers parts of El Dorado and Yuba counties.

Meanwhile, District Five will begin up near Coloma and stretch south through all of Amador, Calaveras, Tuolumne and Mariposa counties and parts of Stanislaus and Fresno counties.

Democrat Kermit Jones had earlier announced plans to challenge McClintock in the original District Four. Now that redistricting has thrown a wrench, Jones announces that he will run for District Three, which does not include the Mother Lode.

Clarke Broadcasting reached out to McClintock’s campaign this morning, and a spokesperson relayed that the Congressman is still looking at both District Three and Five, and indicated he has not made a final decision about his election plans.