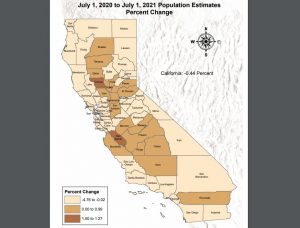 Sonora, CA — The counties in the Mother Lode followed the state’s trend and dipped in population over the past year.

The new statistics from the California Department of Finance show that Tuolumne County lost 689 residents to bring the population to 55,500. It was primarily due to more deaths than births. There were 766 deaths and 398 births. The county also lost 327 residents in the category of net migration (how many people move in versus move out).

Calaveras County declined by 166 residents to bring the population to 45,277. There were 586 deaths and 360 births. However, the county gained 56 people via net migration.

The state reports that most of the population declines were in coastal regions and along the Sierra Nevada. The greater Sacramento region and the San Joaquin Valley were areas that reversed the trend and primarily saw a population increase (see map in image box).