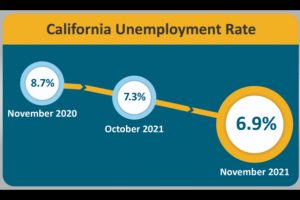 That number is less than half of the jobs the state gained in October, but still enough to account for nearly 22% of all U.S. job growth in November. California’s unemployment rate dipped below 7% for the first time since the start of the pandemic in March 2020, falling from 7.3% in October to 6.9% last month.

The Mother Lode rates followed suit with at least a half a point decline for both Tuolumne and Calaveras counties. Tuolumne dropped from 6% in October to 5.4% last month. There remains 1,070 unemployed out of the county’s 19,610 workforce. Calaveras County deceased after holding steady for the past two months, September and October, at 4.7% to 4.2% in November, matching the nation’s current rate. That has left 900 individuals without a job out of the 21,500 workforce.

While the state “continues to see a robust recovery, creating nearly 22 percent of the nation’s jobs in November and the largest unemployment rate decrease since February, there’s still more work to be done getting folks back to work and supporting that hardest hit by the pandemic,” said Newsom.

White collar office jobs made up more than 41% of California’s job gains in November, followed by gains in the sectors of education and health services and leisure and hospitality that includes restaurants and hotels. Due to specialty trade contractor employment losses, construction saw a decline of 1,700, the largest sector job loss.

Bay Area Marin County had the lowest unemployment rate at 2.9%, while Imperial County in the San Diego area had the highest at 15.5%. The data also highlighted that it is not just the populated parts of the state that are seeing declining jobless rates, other rural areas with traditionally high unemployment rates posted numbers below the statewide average including Shasta, Butte and Madera counties.

The data showed the state still had 1.1 million job openings at the end of October, which has persisted since August as employers struggle to find workers and are forced to raise wages.