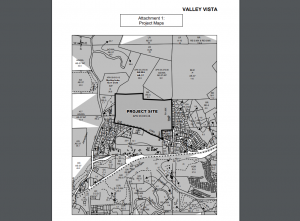 Jamestown, CA — A revised housing project, which has been approved in various forms over the past decade and a half, can move forward in the Jamestown area.

The Valley Vista Community will be situated on the northern end of Golf Links Road and east of Jamestown Road. It was originally approved in 2005 as the Dry Creeks Subdivision and then later amended in 2010.

Project proponent Ron Kopf told the supervisors that the latest proposal, renamed Valley Vista, addresses “changing market conditions over the past 11 years.”  Noting there are fewer units proposed, no longer any age-restricted housing, and some interior circulation changes.

Kopf added, “It has been well documented that our state and county have a need for all types of housing. Lack of housing impacts our young adults trying to move back, businesses or services trying to attract qualified workers, and seniors trying to downsize and remain close to friends and family.”

Several people spoke about the project. A couple of property owners raised concerns regarding things like traffic and fire, while some business leaders highlighted the pressing need for it, and the local demand for more housing.

Kopf argued that the General Plan supports this type of planned community and said it has gone through a lengthy regulatory review process.

In addition to more housing, Kopf added that it will feature a community center, sidewalks, trails, neighborhood commercial area, TUD water, an underground propane system, and fire-safe building materials. You can read the entire 461 page document detailing the project by clicking here.

Supervisor Anaiah Kirk motioned to approve the project with some additional recommendations made by the Community Development Department. It was seconded by Supervisor Ryan Campbell. Supervisor Jaron Brandon then requested a substitute motion that makes some changes regarding fencing. For example, additional fencing must be placed around a historic rock wall while construction is taking place nearby it. And if the wall is damaged during construction, it must be restored to the previous condition.