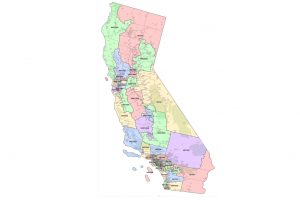 Sacramento, CA —  Some members of Congress are left without a political home and others would face off against colleagues in their own party in the 2022 midterm elections if the newly released political maps from California’s redistricting commission were adopted.

The maps released late Wednesday are drafts that could change significantly before they are finalized in December. They offer a first look at how California’s loss of a congressional seat, from 53 to 52, will reshape its political landscape. The drop in seats was because its population grew more slowly than other states over the past decade. Yet it remains the largest House delegation by far, as each of its congressional districts represents about 760,000 people.

Regarding the Mother Lode, an early map put Tuolumne County in Congressman Kevin McCarthy’s district. A quick re-draft several days later and one of these new maps puts the county back in Congressman Tom McClintock’s region that now covers parts of 15 Sierra Nevada counties, as earlier reported here. Click here for the latest Calaveras redistricting map.

Overall, the draft maps appear to create four highly competitive congressional races, one being that of Republican Devin Nunes, and could even pit incumbents against each other. Eleven seats in California are held by Republicans with hopes to win more as the party seeks control of Congress. The current draft maps appear to make that a possibility with an opportunity to pick up the Central Valley seat now held by Democratic Rep. Josh Harder. He is one of the incumbents who appears to fare the worst in the draft maps. Harder flipped the Republican-held seat in 2018 and won reelection in 2020. But his district would cut Democratic territory and pick up Republican areas in the redrawing draft.

One key in drawing the maps is that the redistricting commission is not allowed to consider the party identification of voters. The California Citizens Redistricting Commission approved by voters in 2008 was created in an effort to remove partisanship from the once-a-decade process of redrawing political maps. The criteria the commission must follow include creating districts with equal population, compliance with the federal Voting Rights Act designed to protect the political power of racial minorities, and geographic continuity.

The commission will take public comment over the next two weeks then begin making changes with the final maps due Dec. 23.