Sonora’s Christmas Parade Is On! 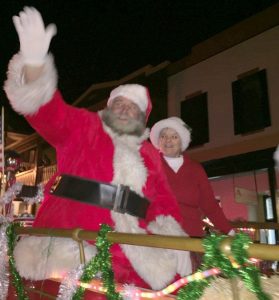 Sonora, CA – With last year’s Sonora Christmas Parade canceled by COVID, this year kids will get a chance to see Santa ring in the holiday season now that the final roadblock for putting on the event has been removed.

“This is exciting news we’re all looking forward to being able to put this parade on for the community and to have the community as part of it,” exclaimed Kim Campbell with the city’s community development department. She added, “It’s something that quite a few of us have had kids and now grandkids that we take every year to the parade.”

That first hurdle was getting a letter from Tuolumne County Public Health detailing any needed safety protocols, which it received in September. That allowed the city to move ahead to tackle its final obstacle, approval from Caltrans for an encroachment permit. That came earlier this week, according to Campbell.

“We were told it would take six to eight weeks to begin with and I believe it took all of about five weeks, so the anticipation seemed a little greater. It actually worked out wonderfully. I think we got it a little bit earlier than we anticipate overall,” noted Campbell.

Even while waiting for the final green light, the city continued planning the 38th Annual Historic Downtown Sonora Christmas Parade, optimistically announcing the parade’s date of November 26th at 6 p.m. It also provided applications for entries in the parade, click here. Campbell says they already have five applications, and she expects more now that the city has approval for the lit-up floats, horses and marching bands to parade down Washington Street.

When asked whether she believes the lingering coronavirus will have an impact on turnout, Campbell stated, “That is a tough question to answer. I’m not really sure at this point. We hope to have a huge crowd, but then again people make different plans. We would like to think that people will come out to watch the parade.”

Masks are required for all those in the parade and attendees are asked to follow current public health COVID protocols.