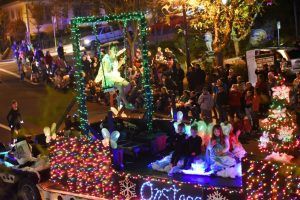 Sonora, CA — After receiving a letter with recommended safety protocols from Tuolumne County Public Health, the City of Sonora is moving forward with plans to hold the 38th annual Historic Downtown Christmas Parade.

We reported last week that the council voted 4-0 to proceed with the parade, but in order to receive a permit from Caltrans, there must be a letter included from public health detailing any needed safety protocols.

We reported that later in the week that public health sent a letter to the city recommending that gatherings with over 50 people be postponed, but if not, that safety measures be followed. They include having all events outdoors, wearing masks and having participants be fully vaccinated.

City Administrator Mary Rose Rutikanga responds, “The City will be submitting the letter received from Public Health to CalTrans as part of our encroachment permit application.  The City fully intends to follow the safety protocols as dictated by the Public Health Department. The Christmas Parade is held outdoors and we strongly encourage all those in attendance to be fully vaccinated, stay home if feeling unwell, wear a mask at all times, and maintain social distancing.”

She adds, “At this time, although the City is awaiting CalTrans’ decision on our encroachment permit, we will be moving forward with plans to hold the Christmas Parade on November 26th. Unfortunately, the CalTrans encroachment process can take anywhere from 6-8 weeks so we will not know officially until CalTrans signs off on the Christmas Parade.”

The 2020 parade was canceled. It appears it is now up to Caltrans if the 2021 event will proceed.