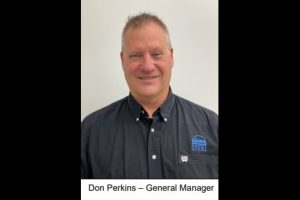 Sonora, CA – A long-time employee of Tuolumne Utilities District (TUD) has been tapped as the new permanent general manager.

That position opened up after the district’s board of directors voted to release then-GM Ed Pattison from his contract in April, as detailed here. In June, the board moved  Don Perkins, the district’s Operations Manager, into the role of Interim General Manager. He was“to oversee the general manager duties until the Board could evaluate the district’s needs for a permanent General Manager.” TUD announced that after a series of meetings, the board elected to appoint Perkins to the job full-time.

“I am humbled and grateful to be selected as General Manager for the district. The district and the county are facing some real challenges and exciting opportunities that will fundamentally change the way we operate and serve our community. I take great comfort in knowing firsthand how talented and hard-working the staff is here. The TUD Board and staff are committed to making the best decisions to benefit the county now, and forever,” stated Perkins.

Perkins has worked for TUD the past 21 years, the last six serving as operations director.

“When it comes to the importance of water, fire and public safety, Don understands we are all in this together, we have a responsibility to the entire community and our future. We are fortunate Don can hit the ground running, given his experience as TUD operations director,” shared Board President, Barbara Balen.

TUD relayed that Perkins will assume the GM position immediately.