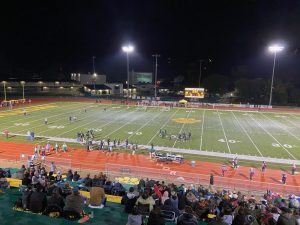 The Sonora Wildcats beat the Argonaut Mustangs 28-21 Friday night in a thrilling contest for control of the Mother Lode League.

Argonaut received the opening kickoff and promptly marched down the field for a touchdown with a pair of long runs from junior running back Mateo Flores.  Sonora’s first drive produced a lot of yards but no points as they failed a 4th down conversion deep in Mustang territory.  After the defense forced an Argonaut punt, the next Wildcat drive hit pay dirt on a 4-yard TD run from senior Erin Greenway.  A missed extra point put the score at 14-6 as time expired in the first quarter.

The second quarter began with Argonaut backed up deep in their own territory after a chop block penalty put the ball on their own 14-yard line.  The Mustang’s fortunes swung quickly, however, as blown pass coverage on a slant pattern to senior wide receiver Colby Eckhart turned into an 80-yard touchdown.  The Wildcats’ next two possessions ended with an interception and a stalled drive at midfield, leaving the score 14-6 Argonaut at the half.

Sonora opened the second half with a punishing series of run plays, taking the opening kickoff for 65 yards and a TD on a drive that featured two 4th down conversions and chewed through 8:32 of game time.  After finishing the drive with his second touchdown of the night, Greenway got the call again on the 2-point attempt and delivered, tying the score at 14 all.  The first play of the ensuing Argonaut drive was a pass picked off by senior Kenny Scott who returned it to the Mustang 44-yard line.  From there, the Wildcats gutted out another tough series with two more 4th down conversions, culminating in a TD on a beautiful option keeper from quarterback Bradley Curnow.  The Mustangs put together an impressive long drive of their own in response before Chicken Ranch Casino Player of the Game Jonah Gabel delivered a 4th down sack to end the threat.  A few plays later, junior Jack Teem added a 20-yard touchdown run for the Wildcats to put the game away.

Sonora improves to 5-3 overall and 3-0 in league play.  The win also puts the Wildcats in sole possession of first place and the Mother Lode League’s automatic bid to the sectional playoffs.  Sonora hosts cross-county rivals Summerville next Friday in the regular season finale.

The Summerville Bears played an outstanding game on Friday night, defeating Calaveras 30 to 6. The victory ups the Bears’ record to 4 and 3 on the season and 2 and 1 in the Mother Lode League.

With the offensive line doing a fine job blocking, the Bears were in control for most of the action. They took a 17 to 6 lead into halftime and never looked back. Kai Elkins led the team in rushing with 122 yards on 18 carries. Jordan Cribbs caught 7 passes, most of them shovel passes on fly sweeps, for 93 yards and 2 touchdowns.

Braylon Leveroos was tapped as the player of the game, going 9 for 9 passing for 108 yards and 2 touchdowns, while adding another touchdown with a short run. The Bears will play their final regular season game next Friday in Sonora.