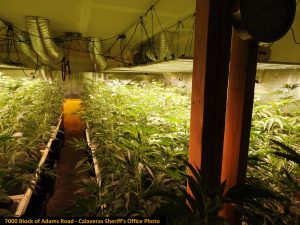 Calaveras, CA–On the fifth of October, the Calaveras County Sheriff’s Office Marijuana Enforcement Unit served a search warrant for illegal marijuana cultivation in the 7000 block of Adams Road in Jenny Lind. Deputies eradicated 2,887 growing marijuana plants and 77 pounds of processed marijuana with an estimated value exceeding $3,853,000. Two suspects attempted to flee from the area and were arrested by deputies and placed under arrest. The house and large metal shop building had been entirely converted to facilitate indoor cultivation. Modifications to the shop building included the addition of a second interior level which was used for cultivation. The structures were Red Tagged for violations and hazards by Calaveras County Code Enforcement Officers and the two suspects, Yueneng Chen , age 33 of Valley Springs, and Ye Wubing, age 46 of Valley Springs was booked into jail on drug-related charges in addition to resisting arrest. The investigation is ongoing

On October sixth, a search warrant was served in the 2000 block of Stagecoach Road in Copperopolis. Deputies seized 116 growing plants with an estimated value of $81,000. Alvaro Ernesto Garcia, age 56 of Copperooplsis, was issued a citation on Marijuana charges and Conspiracy to Commit a crime. The investigation is ongoing.

On October 14th, a search warrant was served in the 4000 block of Blue Mountain Road in Wilseyville. Deputies seized 135 growing plants with an estimated value of $94,000. The site had been previously eradicated in 2020 when deputies seized 231 growing plants. No suspects were contacted at the site. Evidence was collected and the investigation is ongoing.