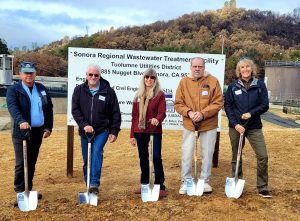 We reported earlier that the existing facility is approaching 50 years of service and in need of replacement. The project site is within the footprint of the existing plant at 1400 Southgate Drive.

TUD reports that there will be a new septic receiving facility, a new headworks screening and a grit removal system, tertiary filtration, secondary clarification, an emergency storage basin, a new administrative/operations building, emergency standby power, and other improvements.

The $35-million construction contract was awarded to Kiewit Infrastructure West out of Fairfield, California.

To fund the project, TUD received an $8.5-million grant from the USDA, $24.9-million in USDA low-interest loans, and set aside $8.8-million from its wastewater reserves.

TUD Board members, and others, were on hand for a ceremonial groundbreaking held at the site this morning.

The project should be completed within two years.

TUD reports that the facility will be capable of treating an average of 2 million gallons of wastewater per day that will meet the current California Title 22 Standards for Disinfected Tertiary Treated wastewater.