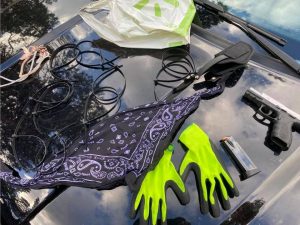 Twain Harte, CA — A Columbia man was arrested in the area of Joaquin Gully Road in Twain Harte on numerous charges.

The Tuolumne County Sheriff’s Office received a report that the man was suspiciously sitting in his vehicle with a gun in the center console.

The responding deputies found the vehicle unoccupied, and noticed that there was tape placed in a way that obstructed the view of the front and back license plates. 34-year-old Mathew Richison reportedly started walking toward the car, but when he saw deputies, he went the other direction. Officials then ran over and detained him. Richison was wanted on felony warrants and prohibited from having a firearm.

The handgun was located in a shopping bag he was carrying. He also had around three grams of heroin in his pocket. Richison was booked into county jail on drug and firearm-related charges, in addition to the earlier felony warrants.