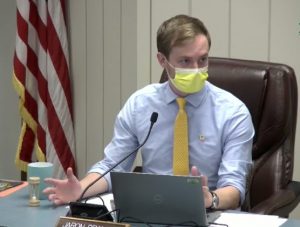 Sonora, CA — The Tuolumne County Supervisors tabled a vote until a later time on whether to purchase a camera designed help deter illegal dumping.

District Five Supervisor Jaron Brandon proposed that the county go to Lowe’s and purchase around $10,000 worth of surveillance equipment to help catch people illegally dumping trash in the county. The camera could be placed at different unidentified hotspots as a way to get people to think twice about the crime.

Brandon said it would be a pilot program, and if successful, more cameras could potentially be purchased. Brandon noted that the idea was brought to him by Jason Revord with the non-profit 1 Pile at a Time. The group goes out and cleans illegal dumping sites. Revord has noticed an increase in the problem recently, including more trash in local waterways.

The other four board members expressed support for the general concept, but felt the details should first be hashed out by the county’s Solid Waste Committee, before taking any action.

During the comment period, Sheriff Bill Pooley and District Attorney Cassandra Jenecke both spoke positively about preventing illegal dumping, but expressed a desire to be more closely involved in the conversation. Sheriff Pooley noted that there is a current staffing shortage that creates challenges when investigating these crimes. DA Jenecke expressed a similar sentiment, noting that illegal dumping is a misdemeanor, and indicated there are more severe felony crimes increasing in the county like domestic violence incidents. CAO Tracie Riggs also pointed out that it is more complex than simply going out and placing cameras. She noted there are right of way agreements that legal staff would need to work out with private property owners.

Brandon proposed tabling the matter for one month so that there is time for the Solid Waste Committee to meet and further discuss the matter. Staff and other board members felt a month was too short of a time frame. Brandon countered that he would at least like an update on the matter in a month’s time. Board Chair Ryan Campbell said the supervisors on the Solid Waste Committee, he and Supervisor David Goldemberg, could give an update next month during their board reports. Brandon then said he preferred a more open conversation where people can ask questions and give feedback, as opposed to just statements during the reports.

Board member Anaiah Kirk eventually motioned to more generically table the matter until the Solid Waste Committee has sufficient time to give a recommendation.

The board then voted 5-0 in favor.