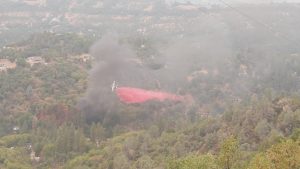 Tuolumne, CA — Drift smoke from the south has been prevalent over recent days, and there were also a couple of local weekend fires.

A house was destroyed in the 19000 block of Mi Wu Street in Tuolumne on Saturday. The flames broke out at about 2pm. Air and ground resources responded and it was quickly contained.

Also, there was a vehicle fire Sunday evening along Riata Way the Copperopolis area. Thankfully it did not spread to any vegetation. It happened during the seven o’clock hour.

In addition, a lot of drift smoke has been in the region over recent days. Much of it is coming from the KNP Complex Fire in the Sequoia National Forest to the south. The fire is 62,000 acres with 20-percent containment. It is burning in a heavily wooded area. There is also a 90,000 acre Windy Fire in Tulare County that is 40-percent contained.