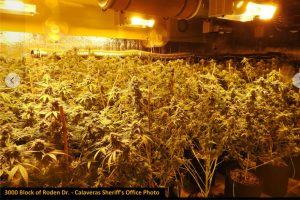 Calaveras County, CA – On four days, stretching from mid-August and through the first week of September, Calaveras County Sheriff’s Office Marijuana Team eradicated an estimated $6.8 million worth of pot from illegal grows.

The first raid was on August 23 in the 5000 block of Paramae Road in Railroad Flat. Deputies seized 107 growing marijuana plants with an estimated value of over $74,000. No suspects were found at the site.

Two days later, on August 25th, a search in the 3000 block of Roden Lane in West Point discovered a residence that had been converted into an indoor marijuana cultivation. Deputies seized 971 growing marijuana plants. No suspects were contacted at this site either.

That same day on an unrelated search in the 6000 block of Riata Way in Angels Camp, the unit seized 3,688 growing marijuana plants estimated worth around $4,794,000. Also uncovered were two firearms in the residence that had been converted for indoor marijuana cultivation. There was also a large shop structure on the property that had been entirely converted for indoor marijuana cultivation.  Inside there were two levels and multiple rooms with marijuana plants in several stages of growth. The buildings were

“Red Tagged” for structure violations, including unsafe electrical wiring and construction. At this site, deputies arrested three suspects with related marijuana illegal cultivation and sales. Those handcuffed were Mei Chang Chen, 57, and Xiongying Chen, 56, both from Angels Camp, and Xiaoping Liang, 40, of San Mateo.

Sheriff’s officials relay that evidence was collected at all the scenes, which are still under investigation. Anyone with a tip regarding and illegal grow can call the sheriff’s office Anonymous Marijuana Tip Line at (209) 754-6870.