7 Raids And 7 Arrests At Illegal Pot Grows In Calaveras 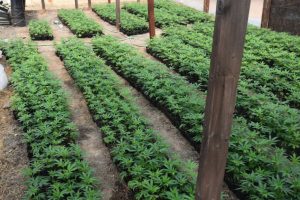 The total worth of the over 7,600 plants seized at the grows is estimated to be around $5.2 million. The first search conducted by the Calaveras County Sheriff’s Office Marijuana Team took place in the 1000 block of Paradise Peak in Valley Springs. Deputies seized 1,194 pot plants with an estimated value exceeding $1,552,000 on August 5th. Sheriff’s officials report that the resident had been converted into a grow. Due to electrical and building hazards and violations Calaveras Code Compliance Officers “red-tagged” the residence. No arrests were made.

About a week and a half later on August 16th, two raids were made. The first in the 2000 block of Evans Road in Valley Springs where the unit seized 82 marijuana plants with an estimated value exceeding $57,000. A firearm was also confiscated. One person, 30-year-old Seph Caleb Seimears of Stockton, was issued a citation for marijuana cultivation, sales and conspiracy to commit a crime.  Later that day, in an unrelated search at a property on the 5600 block of Paloma Road in Paloma, 499 growing marijuana plants with an estimated value exceeding $349,000 were seized. 22-year-old Cristian Emmanuel Mendoza of Modesto was cited for illegal marijuana cultivation.

Two days later (August 18) the team searched a property in the 1000 block of Hidden Valley Road in West Point. Deputies seized 173 growing marijuana plants and 125 pounds of processed marijuana with a combined estimated value exceeding $151,000. No suspects were located at the site. An unrelated search later that day at a property that has been raided five times before uncovered 425 pot plants with an estimated value exceeding $297,000. The property, in the 400 block of Blossom Lane of Rail Road Flat, was eradicated once in 2018 and four times in 2020. Sheriff’s officials detail that the total plants eradicated during the August 18 raids exceed 7,900 and were valued at more than $5.5 million. No suspects were found at the scene.

A day later (August 19) in the 8000 block of Skunk Hollow Lane in Rail Road Flat, 151 pot plants worth an estimated $105,000 were confiscated. This property was also searched in 2019, resulting in one arrest and over 100 marijuana plants and more than 370 pounds of processed marijuana seized. Later, in the 11000 block of Arapaho Way in Burson, deputies seized 3,934 growing marijuana plants with an estimated value exceeding $2,753,000. Several suspects took off running when deputies arrived at the site with five, all from outside of Calaveras County, arrested.

Sheriff’s officials encourage anyone with knowledge of illegal marijuana operations to call the Sheriff’s Office Anonymous Marijuana Tip Line at (209) 754-6870.