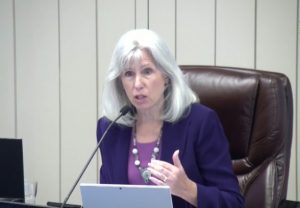 Update at 3:30pm: The Tuolumne County Supervisors reconvened this afternoon to further discuss COVID-19 and health directives. As reported below, much of the discussion this morning revolved around the idea of requiring county workers to either get the COVID-19 vaccine or test weekly. Supervisor Jaron Brandon indicated that while he disputes some of the earlier arguments made, he is not in favor of a vaccine directive. Without a majority in favor, the county will look at things such as increased testing for all employees, masking rules and temperature checks to help slow the spread. More details about the meeting can be found below.

Original story posted at 1pm: Sonora, CA — While no action was scheduled for a vote today, there was another passionate debate about whether Tuolumne County government workers should be required to either get the COVID-19 vaccine or test weekly.

It came up during today’s discussion scheduled for the nine o’clock hour at the supervisor’s meeting in which health officials gave an update about the recent increase in local cases. Discussion continued into the noon hour as two board members, and several concerned community members, spoke in opposition of earlier discussed vaccine directives.

At a meeting last month, three board members indicated a desire to put in place the vaccine/testing directive for county government workers (supervisors Ryan Campbell, David Goldemberg and Jaron Brandon). It was noted today that the issue is being reviewed by labor negotiators, and it will come back to the board at a later time for implementation.

Supervisor Kathleen Haff put out a 10 page position paper about information she feels is being “suppressed” related to COVID-19. She stated, “Fear prevails right now, and fear has been prevailing ever since we noted that something was going on in China. And it is unnecessary to be fearful of COVID.” She cited treatments available.

Supervisor Anaiah Kirk also raised concerns about putting the directive in place. He added that many have a level of natural immunity after contracting COVID. Asked about it, Dr. Eric Sergienko said it would be logistically challenging to find the level of antibody response a certain person has. Dr. Sergienko stated the most robust protection is likely having natural immunity and the vaccine.

Kirk questioned whether people who refuse to comply with directives would be fired. He feels that would be a violation of freedoms.

Kirk pushed for educating people via preventative treatment to boost immune systems. He also proposed an alternative to the vaccine…regular testing of all workers and n95 type masks being distributed.

The room was nearly full with community members who were mostly concerned about vaccine directives. Both Haff and Kirk received standing ovations after their speeches.

During public comments, there were many who advocated for the use of ivermectin for COVID patients. Adventist Health Sonora’s Chief Medical Officer, Dr. Alexander Heard, raised concerns about it, stating there have been a couple of recent local cases where patients have experienced severe liver failures after taking the drug, one of which was unprescribed and an overdose.

Other members of the general public voiced positives about ivermectin, and what they feel are its benefits.

Sheriff Bill Pooley also spoke and said there is a lot of angst and anxiety among his staff about “where this is going to go” (vaccine directives). He encouraged the board to speak with staff about ways the disease is being controlled already, citing preventative measures in the jail.