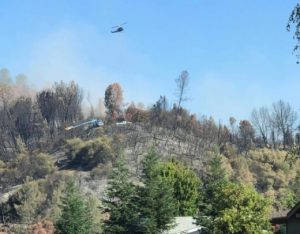 Sonora, CA — The number of structures destroyed by the Washington Fire is up to 19.

Officials have been assessing the damage in recent days, and an update was provided at today’s Tuolumne County Board of Supervisors meeting. County Office of Emergency Services Coordinator Dore Bietz noted that 15 were residential structures, two were commercial, one was a mix residential/commercial and there was an additional minor structure.

The fire, which ignited on August 26, scarred 136 acres. As of late last week, it is 100-percent contained.

The county is requesting state help to clean up the damage left behind. Phase one would include removing household hazardous waste, and phase two is removing other hazardous debris. The work needs to be done by trained professionals.

If the request for state help is denied, the county will look at “plan b,” which would include using county money to fund the efforts, or grant money, or potentially implementing code enforcement and abatement measures.

Officials are also assessing ground stability on the fire-damaged slopes and mitigation measures that may be necessary.

The county continues to operate a resource assistance line for anyone in the community with questions.  It is 209-533-5151.

While discussing the fire, the supervisors also praised the work of firefighters and first responders.

Brandon says, “We are talking about steep slopes, difficult terrain and white ash. We got lucky, and it is amazing it didn’t jump some of those retardant lines.”

CAL Fire Chief Andy Murphy added, “Just a reminder to the public…we are not out of the woods yet. We still have a couple of months, our most dangerous months, as the fuels have been drying, and we’re having fires every day. Be vigilant because one less spark means one less wildfire.”