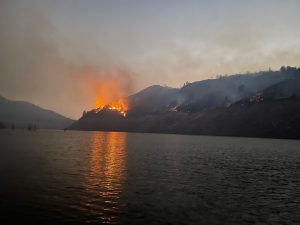 The fire’s final acreage is 639. The blaze ignited on Wednesday (Aug. 25) afternoon of last week in Calaveras County near the banks of New Melones Lake, as reported here. The flames moved swiftly crossing Airola Road and headed along Parrotts Ferry Road towards Vallecito and Highway 4.  Hundreds of residents were forced to evacuate their homes as firefighters battled the flames in steep and rugged terrain. Luckily, no structures were destroyed or damaged in the blaze.

CAL Fire details that the fire has been active for nine days and firefighters will continue the “mop-up of established fire line, regularly patrol and will remain in the area until suppression repair is completed.”

CAL Fire relays that no injuries were reported in the fire. Resources remaining on the scene are two engines and hand crews. What ignited the fire is still under investigation.