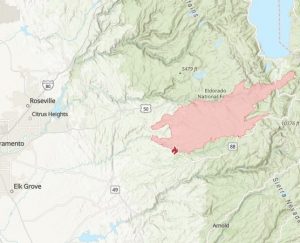 The counties of Amador, Alpine, El Dorado and Placer are included in a Presidential Disaster Declaration that will help those jurisdictions recoup costs associated with fighting the Caldor Fire.

The incident, which has spurred the evacuation of South Lake Tahoe, and other nearby areas, is over 210,000 acres and 25-percent contained. Calmer winds and the return of moderate humidity have helped firefighters recently slow the spread of the flames.

The Presidential Declaration came after Governor Gavin Newsom declared a State of Emergency related to the fire on Monday. Newsom says, “Our continued partnership with the federal government is critical to protecting communities and ensuring impacted Californians have the supports they need to get back on their feet.”

The Associated Press reports that officials were initially hoping to have the fire contained by this past Monday, after it ignited on August 14. However, there were challenges in getting resources because they were tied up on the larger Dixie Fire burning to the north.