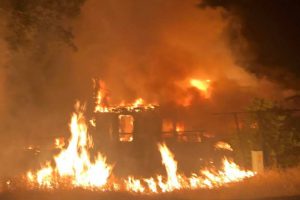 Jenny Lind, CA – Calaveras Consolidated Fire Protection District reports that since Friday there have been three fire incidents in the Jenny Lind area of Calaveras County in the past five days while also updating detail surrounding the largest blaze.

While Calaveras Consolidated Fire Protection District is not reporting foul play or a connection between the fires, all remain under investigation. The most recent was a house fire on Milton Road that broke out around 3 a.m. Tuesday.  The district reported the home was fully engulfed in flames and had spread to nearby grass when firefighters arrived at the scene. Luckily, the home was unoccupied. District fire officials are investigating a cause.

That same day district firefighters responded to an RV/camper fire on Main street in Jenny Lind. While district officials say the incident is unrelated to multiple vegetation fires last Friday, they noted that this is the third incident in the area in the last five days. CAL Fire is investigating what ignited this blaze.

The first fire was a series of six roadside blazes ignited along Milton Road on Friday (July 30) evening. District officials noted that the first fire was “well established behind eight homes on Main Street in Jenny Lind.” They relayed that their first two engines went direct on the flank behind the homes where vegetation, brush, and trees between the river and the residences were dense and putting out heavy smoke and flames. Calaveras Sheriff’s Deputies evacuated those houses as well as several (no exact numbers were given by district officials) homes along with several in the China Gulch area.

The six roadside fires were spread out over 4 miles on Milton Road from Main Street in Jenny Lind and the landfill in Milton. The largest was the Robie Fire initially estimated at 200a acres. It was the result of two of the fires becoming one. District officials confirm that several of the fires merged into one, leaving three fires.

District officials now say that the total combined acreage of the six fires was around 88 acres. Luckily, no homes were destroyed by the flames but there was “significant damage to the personal property behind the residences on Main Street,” according to fire officials. Also, one firefighter was treated for heat exhaustion but was treated at a local hospital and released.

While CAL Fire is investigating the cause of these fires, district officials disclosed that witnesses reported: “a vehicle was dragging a metal object on Milton Road.” As Clarke Broadcasting reported during the fire, the CHP listed a ford pickup hauling a travel trailer that got caught up in some wire dragging on the asphalt and sparking the blaze, as reported here.