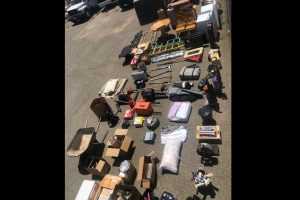 Pioneer, CA – A Calaveras County man was arrested in connection with a string of residential burglaries around Pioneer in Amador County.

Detectives later learned that so much loot was taken it had to be hidden in a rented storage unit. No details were released on how many homes were broken into, but sheriff’s detectives investigating the burglaries finally turned up a name of a possible suspect, David Richard Lopez Jr. A raid of his home in Mountain Ranch uncovered “a significant amount of stolen property,” according to sheriff’s officials. He was arrested for residential burglary, possession and receiving of stolen property, and vehicle theft. What type of vehicle and from where it was taken was not disclosed.

While doing a follow-up investigation, detectives say they “connected an associate of Lopez as being involved in the burglaries and learned there was more stolen property hidden at a storage unit in Pine Grove.” That person’s identity was not released. A search of the unit produced a huge amount of stolen property, including large appliances, HVAC system components, gas-powered tools, and other miscellaneous items pictured in the image box.