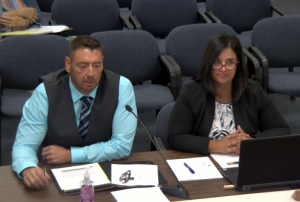 Sonora, CA — Many of the drought-related challenges witnessed in Tuolumne County back in 2014 and 2015 are emerging once again.

The county is in the early stages of a potentially concerning trend over the coming months.

Office of Emergency Services Director Dore Bietz coordinated a presentation on local drought conditions at today’s board of supervisors meeting. Related to the recent dry spell, she noted that last March the federal USDA designated 50 counties in California as “primary natural disaster areas” due to drought. On May 10, Governor Gavin Newsom issued a Statewide Drought Emergency noting there are risks of water shortages in many communities if drought conditions continue into next year. On July 8, Newsom then issued an Executive Order asking all Californians to voluntarily conserve water use by 15-percent.

Numerous local private water wells dried up in the fall of 2014, and Tuolumne County was coordinating a program by 2015 to truck in potable water to help many county residents cover basic health and safety needs. The program ended after the county saw wetter winters in the immediate years that followed.

Stating, “I kind of anticipated that we would see an increase in well failures this coming fall. I can tell you that I was wrong. We are seeing them now.”

He added that several months back the only local water hauler based in the county was fielding about a single call per day for assistance with failed wells, and it is now up to 6-12 per day.

Regarding the severity of the drought, Kostlivy said the “shoe could drop” this fall and continue into 2022 if there is another similar dry weather year.

Another concern brought up is that Tuolumne County only has two commercial well drillers, and if they retire soon, there will not be anyone left locally to service customers. Representatives from the industry were on hand and voiced concerns about increased state regulations that make the drilling practice more and more difficult. They also encouraged those on wells to conserve water when possible.

From a business perspective, officials with Evergreen Lodge near Groveland stated that their wells started suffering in June and July, and the business is having challenges keeping up with demand. They are working with the county currently to drill an additional well.

TUD Interim General Manager Don Perkins and Community Affairs Specialist Lisa Westbrook also spoke at the meeting. Perkins noted that Pinecrest and Lyons reservoirs both “filled and spilled” this year and indicated the district should be ok with water supply in the coming months as long as customers are somewhat conservative, especially up until Labor Day, when Pinecrest Lake can be drawn down further following the summer recreation season. Perkins added that most TUD customers have positively changed their water use practices following the 2014-15 drought.

It was also noted that the Twain Harte Community Services District has seen an increase in water use this past year. It is believed that this is partly due to more people using part-time homes as permanent residences.

At the end of the presentation, the board of supervisors voted to continue a localized state of emergency related to the drought. The Office of Emergency Services has also restarted Drought Task Force meetings with the numerous local water partners. Drought presentations will be delivered to the board at least every 60 days, moving forward.