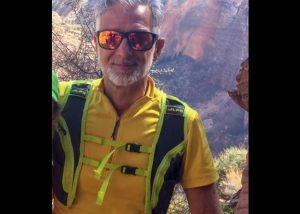 Yosemite, CA — A man from Reno who has competed in marathons across the world is missing in Yosemite National Park.

61-year-old Fred Zalokar left for a day-hike on Saturday heading from Happy Isles to the summit of Mount Clark. He was using an off-trail route from Bunnell Point. He did not return to Yosemite Valley as planned and his whereabouts are unknown.

Officials are also seeking info from people hiking off the trail between Merced Lake Trail and Merced Pass Trail over the weekend. Or anyone who was in the area of Mount Clark or Starr King. Even if you did not see Zalokar, the information could help officials narrow the search.

Zalokar is 6’0”, 150 pounds, with gray hair and brown eyes. He was wearing a yellow shirt, khaki shorts, a brown ballcap, sunglasses and a red Mammut bullet pack.

An adventurer, he has also visited 137 countries and climbed 185 mountains.