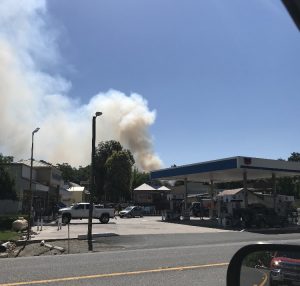 Jamestown, CA – A grass fire in Jamestown spread to an outbuilding with a roof that fueled the blaze and highlights a fire hazard.

Dubbed the “Terrace Fire” it ignited around 10:40 a.m. on Friday (July 2) in the 10300 block of Preston Lane near Seco Street by the Jamestown Terrace Apartments, as earlier reported here. A large plume of smoke could be seen in the sky as the image box picture shows, produced mainly from an outbuilding set ablaze from the flames. CAL Fire spokesperson Emily Kilgore relays this incident provides a good prevention message, “The ember cast that was produced from the fire did ignite an outbuilding nearby. The reason that happened is that the old outbuilding had a shake shingle roof, which is not fire-resistant, so that outbuilding did suffer some significant damage.”

Shake shingles are 100-percent dried cured woods, detailed Kilgore. She added that it is similar to topping a building with campfire wood that sits there for many, many years, which makes it very easy to ignite. Kilgore recommends property owners use these roof replacements, “They’re going to want to consider fire-resistance materials. That could be a composite, metal, or tile roof.”

Firefighters were able to stop the forward rate of spread at a half-acre in about 20 minutes. No evacuation of the apartment complex was ordered. The cause of the fire remains under investigation.