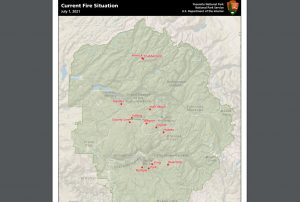 Yosemite, CA — 13 lightning caused fires have been located in Yosemite National Park over the past week.

Three of which are being actively fought because they pose a threat to public safety. The largest of those is the King Fire, sitting at eight acres, east of Glacier Point. It has spurred the closure of two segments of trails from Illiouette Creek to Nevada Falls. The other two being fought are 0.1 acre. They are the Pothole Fire southwest of Glacier Point and the Harden Fire east of Hetch Hetchy.

Two of the incidents, the Lukens Fire and County Line Fire, are contained. They were less than an acre and near last year’s Wolf and Blue Jay fires.

The other fires are in very remote areas, and they are being allowed to burn out naturally for ecological benefit. Those are simply being monitored.