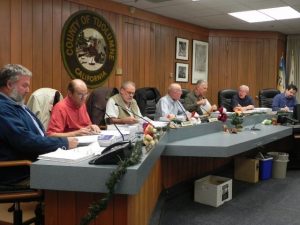 Columbia, CA — The Blue Mountain Minerals Company wants to expand its mining use permit to include another 27 acres, but that will mean cutting down oak trees in that area. Plenty of people packed the Tuolumne County Planning Commission public hearing to have their say on the expansion. The vast majority were wearing hats with the Blue Mountain Minerals logo on it.

Blue Mountain Minerals CEO Jeff Redoutey says, “Why do we need these 27 acres? In the mining process, we develop materials we can’t sell. It has to go somewhere. So I have to have a place to put it. I can’t put it where it interferes with the mining operations. We are asking for an extension of the area where we take the material.”

The company explained it must be able adapt to a changing market place, and the 27 acres provide the needed flexibility. Blue Mountain Minerals touted its economic impact on the area, including 46 jobs in Tuolumne County, and its many charitable contributions. But those opposed to the project argued economics is not the issue.

John Buckley of the Central Sierra Environmental Resources Council says, “If any project came before this commission and talked about wiping out 27 acres of habitat and burying it for decades, you would not say that is insignificant and by law CEQA requires that an EIR be done to consider alternatives to the project and to look for ways to adequately reduce that impact.” Buckley added, “No one is opposing that if they simply follow the law.”

The County’s environmental documents, however, state the entire 27 acres will be completely reclaimed, there are no significant environmental impacts after mitigation, and that the law is being followed. Blue Mountain Minerals insists it has tried to minimize the impact. “We’re not proposing any operational changes. There will be no increase in the amount of material mined, the tons of production, the operating hours, highway, trucks or traffic,” says Carey Haughy a Geologists with Blue Mountain Minerals.

There were nearly 20 citizens who spoke out in support of the project including local business leaders, the Chamber of Commerce, Tuolumne County Business Council, Blue Mountain Minerals employees and neighbors. One thanked the company for being “a good neighbor and doing a good job” for the nine years she’s lived there.

The commission voted unanimously to allow the extension, conditional use permit and the reclamation plan to restore the land after its use.