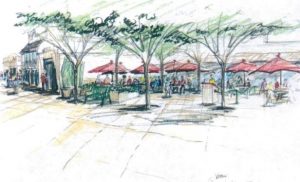 The proposal calls for things like additional outdoor dining, streetscaping, and walking trails. Community Development Director Rachelle Kellogg stresses the plan was community driven and over 500 people commented on the project. The main drive now is funding the different aspects of the plan.

Kellogg says they already have some funding, “One of them is the transit stop down by Church and Washington Streets. The TCTC (Tuolumne County Transportation Council) has some transit money that they are looking to do a new transit stop there which would include some of the modifications like pedestrian access to that corner and some of the landscaping over to Stockton Road.”

Other projects with funding include improving access to Elkin Street at the Red Church and extending the trail from the Mother Lode Fairgrounds to downtown. Kellogg says these projects will need environmental studies and she does not see any work starting for a year or year and a half.

“Implementing the whole plan will take 7 to 10 years. Each aspect that involves the city will include input from the public.”

In addition, the Council voted to deny the bids, and reopen the bidding at the beginning of next year for the Mono Way widening project. As reported previously, the lowest bid for the project was $3.39 million, which was $635K over the City Engineers estimate. Mono Way will be widened to five lanes from Greenley Road to Fir Drive, and the bulk of the construction should start by next spring.