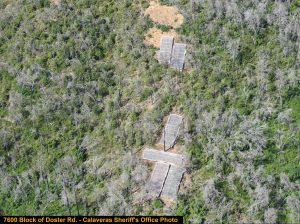 Mountain Ranch, CA — Thousands of marijuana plants were confiscated, and multiple arrests were made, at recent busts in Calaveras County.

The sheriff’s office reports that four separate search warrants were issued over the past couple of weeks.

On May 26, 1,300 plants were confiscated in the 16000 block of Joy Road in Mountain Ranch. 37-year-old Jorge Lara Aceves of San Andreas was arrested on charges of illegal marijuana cultivation, possession of the drug for sale, and conspiracy to commit a crime.

The following day, May 27, 1,420 plants were seized in the 9000 block of Whiskey Slide Road in Mountain Ranch. Arrested on similar charges were 35-year-old Luis Alonso Mejia and 18-year-old Francisco Chaves Madrigal, both of Fairfield.

On June 2, 1,200 plants were located in the 1400 block of South Railroad Flat Road in Railroad Flat. Arrested at the scene were 35-year-old Gabriel Moreno Garcia and 37-year-old Mario Garcia, both from Watsonville.

That same day, around 1,200 plants were seized from the 7,600 block of Doster Way in Mokelumne Hill. No suspects were located. That same address had an illegal marijuana growing operation busted last year with 818 plants eradicated.

The Calaveras Sheriff’s Office encourages anyone with knowledge of illegal marijuana operations to call the Anonymous Marijuana Tip Line at (209) 754-6870.