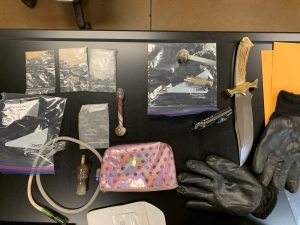 Calaveras, CA–On the morning of June 2, 2021, Calaveras County Sherrif received a call of a report of a possible residential burglary in the 12000 block of Highway 4, Camp Connell. The reporting party was concerned about a suspicious Ford Ranger that was seen on a security camera. The reporting party suggested a possible crime was taking place

Deputies from Calaveras, Alpine, and CHP officers responded to the scene. After arriving, deputies located a vehicle that ended up being stolen and was near a driveway, suspect Jonathan Johnson(36, Sonora) and Christina Archer(36, Sonora) were inside the residence. Both suspects were taken into custody, it was later discovered they had broken a window to gain entry into the home.

Investigating the scene, deputies located drug paraphernalia and multiple small ziplock bags containing suspected methamphetamine. The bags contained meth totaling 42.3 grams. The pair was arrested and booked with charges relating to burglary and narcotics, Jonathan Johnson being held with a bail of $70,000 and Christina Archer is being held with $50,000 bail.