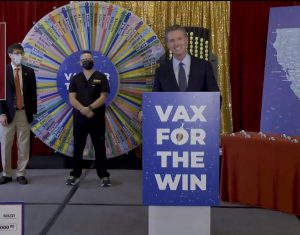 Sacramento, CA — There were no winners from the Mother Lode when the first balls were drawn for California’s new COVID-19 vaccine lottery.

The state initiative, pushed by Governor Gavin Newsom, is designed to encourage more people to get the shot.

Governor Newsom said 21.6-million Californians, who have received at least one dose, were enrolled in the lottery. Today, the first 15 winners were picked, and they will each receive $50,000.

15 additional $50,000 winners will be picked next Friday, and then several grand prize $1.5 million recipients will be selected on June 15.

Today’s lottery was staged like a game show and Governor Newsom was the emcee.

The winners were only identified by a number, and not a name, to protect identities. However, the counties of the winners were announced. There were three each from Santa Clara, San Diego and Los Angeles, two from San Francisco, and one each from Alameda, Orange, Mendocino and San Luis Obispo.

As the final balls were being selected, Newsom joked that they need to find some winners from the Central Valley and Sacramento as well.

He noted that the winners will be called by telephone over the next couple of days and be asked if they wish to be identified and share their reasons for getting the COVID vaccine.

He added that employees of his office, and the state lottery, are not eligible to win.