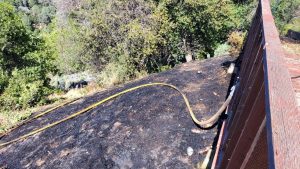 Update at 9:20am: What was initially reported to dispatch as a possible structure fire on North Tuolumne Road was later determined to be a small vegetation fire. Arriving officials have quickly contained it. What ignited the blaze is not immediately clear.

Original story posted at 9:05am: Twain Harte, CA — There is a structure fire reported in the 20000 block of North Tuolumne Road near Gerber Road.

Numerous resources are responding to the scene so be prepared for activity. We’ll pass along more information as it becomes available.